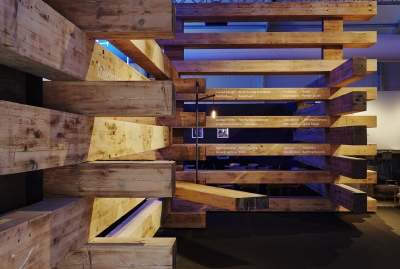 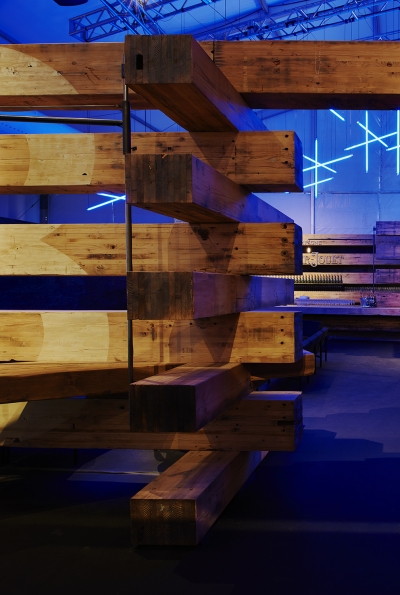 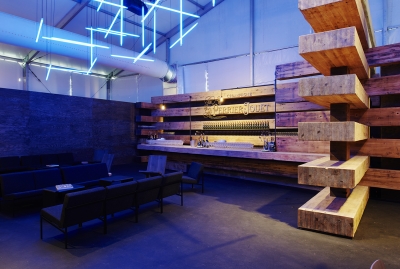 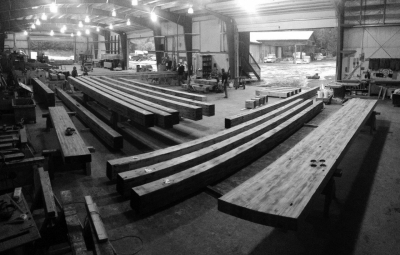 Seattle-based architecture practice Olson Kundig Architects aim to bring a northwest sensibility to this international event, by sourcing lighting, furniture and other design elements from makers and purveyors based in the Pacific Northwest.

38 Beams, designed in collaboration with Spearhead, is a reference to the 38 mid-century glulams (glued laminated timber) used in the structure, originallyformed from wood from the Douglas fir forests of Oregon milled in the 1950s.Salvaged from a building in Los Angeles, the beams –approximately 15x30inches around, and up to 30 feet in length - will serve as the foundation for 38 Beams before going on to find new life in another Olson Kundig project after the fair.

The 38 Beams structure will be complimented by specially commissioned and curated design elements within the space, ranging from a light tube chandelier by Lilianthal/Zamora to the apparel worn by the hostesses, to be supplied by  Seattle-based design and fashion retail house Totokaelo. Over the course of the fair, the space will host Designing Miami: Celebrating Ten Years a portraiture project conceived for the space, for which photographer Gesi Schilling will document the design-world figures that pass through the lounge. Music will be provided by northwest music label, Sub Pop.